Again, there are MANY ways to set up a spawn. The two that follow are the two that work best for me.
Method 1: Spawning in a Tank
They say a photograph is worth a thousand words. How about a video? Check out the above video for my set-up.

- You can breed in many different sized tanks. I like 40 liter (10 gallon) tanks, but I’ve heard anywhere from 10L (2.5g) to 75L (20g) tanks. It must be BARE (no gravel!). The eggs will fall to the floor during courtship, and the male must be able to see where they land. Gravel may trap some of the eggs and make it very difficult to find them.

- Lots of live plants. The more the betta. Java fern and java moss are very tolerant to low light and some salt. Plants foster the growth of microorganisms, which become the first food of newly hatched fry. They also give the female some cover to hide in.

- Indian Almond Leaves. Try to find krinkly ones that have not been ironed flat. Set them on top of the water gently so air becomes trapped underneath and holds the leaf afloat. Position it in view of the trapped female in a quiet corner of the tank to encourage the male to build underneath it. If you want to watch/photograph the action, then I suggest one of the front corners.

- Sponge filter with very slow bubble rate (control with gang valve). Sponge filters provide biological filtration, keep the surface of the water moving just a TINY bit to prevent biofilm formation, and give the female another place to hide.

- A tight cover. Fill in any gaps with plastic. Look for condensation above the water line. The air should be warm and moist above the water. A tight cover prevents fish from escaping (NOT uncommon!), stops bubblenests from collapsing, and also allows the labyrinth organ to develop in young fry. More on that later.

As you can see in the video, the female is confined in a small clear container. It doesn’t matter what you use, but the important thing is that you place the female in something so that they can see each other but not touch (how romantic). I usually put the male in the main tank and the female in the jar the night before a rainstorm or a full moon. (Bettas seem stimulated to spawn when bad weather or full moons occur). I let them talk for about an hour then turn the lights off. Almost without fail, but the next morning the male has a robust bubblenest ready and the female is very round with eggs.

*Pro-Tip* You can steal another male’s bubblenest using a spoon to “jumpstart” the nesting process! If you were conditioning your pair already (see Conditioning) then your eager male probably had a nest already in his own jar. Just transfer his belongings to the new bedroom suite and you’re good to go.

Knowing when to release the female is key. Releasing too soon or too late can ruin the moment. Signs to look for:

- Male is actively flaring at the female. He alternates between furiously building a bubblenest and running back to the female to display.

- Female is rounder in the belly area from egg production. Her ovipositor (little white “egg spot”) is protruding out. If she is dark colored, she may have vertical bars. She should be interested and flaring, but not look like a rabid wolf tearing up the wall.

Neither of them should be shy, disinterested, or have horizontal “fear stripes”. If they do, consider re-jarring and trying again after a week or two.

If everything looks good, awesome! Time to let the magic happen. I usually end up releasing the female between 24-48 hrs after introducing the pair to the tank. I try to release her 5 minutes before lights out. For some reason, my bettas like to spawn very early in the morning the next day. If it doesn’t happen in a day, don’t worry. As long they don’t seem to be in mortal danger from one another, and continue to stay interested, then keep them together. I always cover the tank with a trash bag so that they can't see out. It also makes the male feel more secure when he is guarding his nest full of eggs and fry.

Remove the female once the male devotes all of his time tending the eggs. The female will be pretty spent and I have had many gratefully swim into the net of their own accord. Give her a nice clean jar and plenty of food! If you really want, you could probably re-condition her for a second spawning in a couple of weeks.

The male will continue to guard and care for the eggs. At this point, I cover the tank with a blanket so the male is in near complete darkness and is not distracted by anything outside of the tank. Some males become nervous, especially if it is their first spawn, and may mishandle the eggs or fry. Many of the eggs may be infertile in a first time spawn because, well, imagine having to learn how to flip and twist all at once! Males will eat the infertile eggs and may give the appearance of being “egg eaters”, but in reality, he is probably leaving the healthy ones alone. Cover the tank and leave him be. I sometimes throw in a single large worm close to his nest – some males will eat it, other will ignore it.

After about 3 days - “Hairy nest syndrome!” There will be tails hanging from a bubblenest. Congratulations, you have fry! The male is probably gloating over his little charges at this point. Soon, though, he will be running around with his head cut off trying to keep all the bouncing babies in the nest!

When the fry become free-swimming, it is natural to assume that they have all died because they just disappear! They are extremely difficult to see. The male will stop trying to herd them and will let them wander. It is all up to you now. At this point you can gently remove the male and put him in his own jar. ​
Method 2: Spawning in a Styrofoam Box: 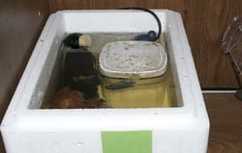 Simple and effective!
I have also been experimenting with a quasi-Thai/Vietnamese way of betta breeding described to me by my fellow CBS member, Minh Nguyen. I have only used it a couple of times, but so far, I really like it!

First find a thick, molded styrofoam box with a tight fitting lid. Wrap the outside of the box several times with tape, otherwise it might leak!

The volume of my boxes are about 15L (4gal), but you can use styrofoam containers larger than this. Fill the box to a depth of about 5cm (2in) with aged and IAL/salt-conditioned water. Add a small heater and check with a thermometer that the temperature is at about 26C (80F).

I put in a spawning mop in the photo to the right to give the female a place to hide, but I have also just put in more IALs. I place the female in her container, and transfer the male's pre-built bubblenest via IAL from his jar to the spawn tank. If the male has no bubblenest built already, or is a bad nest builder, you can easily steal one from another male. The males really don't care who built it!

Next the hard part - put the lid on and don't look! In the evening the next day, open the lid. If there is a nest, and the two are interested/flaring at one another, gently release the female and replace the lid. Leave them alone for 2 days (if possible - I peek morning and night very briefly!) Once there are eggs and the male has chased away the female, slowly and gently remove her with a net. Close the lid and leave the male alone for another 4 days - after that period, they are free-swimming and the male can be removed.
Removing the Male
After the male is removed, I very very gently transfer the fry to a waiting half-filled 10 gallon tank (heated 26C, IAL/salt-treated, with lots of live plants and a couple of sponge filters). I like this method because now I can run two spawns at once and then combine the fry easily into one 10 gallon tank. I always combine spawns that I can tell apart, like red traditional PKs and metallic CTs. Kind of hard to mix those up!