Betta burdigala are just beautiful little bettas from the coccina complex. I received mine from a California Betta Society auction, where Hermanus Haryanto (excellent wild betta breeder from Indonesia) had sent a couple of pairs in to the show. I apprentice judged at that show, and was amazed when this paritcular pair was building a bubblenest in the show container! They don't get more ready than that!

Needless to say, when the pair went up for auction, I couldn't resist. I remember telling myself that I promised NOT to bring any bettas home, let alone a new species. Sigh. My bidding hand flew up of its own accord, and I brought home my new pair of Betta burdigala.

With the help of this extremely helpful website dedicated to bettas in the sometimes difficult coccina complex (Red Wine Bettas at http://redwinebettas.weebly.com/), I was able to set up a suitable home that has had them spawning with  great regularity about once a week! I am very grateful for the extremely soft San Francisco water - I don't have to use an RO unit like most of the United States in order to combat the hard water that most coccina complex members cannot tolerate. Out of the tap, our water has almost zero hardness and neutral pH, so all I have to do is add  a couple of shredded indian almond leaves  to get perfect blackwater conditions. They are housed in a bare bottom 6 gallon square tank, not quite filled up to the top, and lots of driftwood. I have a heavy glass top that has NO gaps (if there were, I would use cling wrap too). I gave them a black film canister to spawn in. 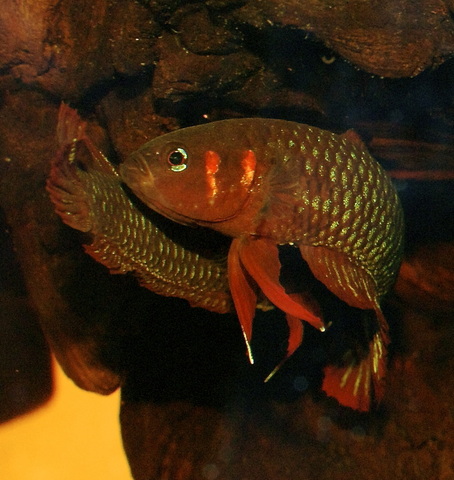 They can spawn for hours like domestic Betta splendens, but only a few (or no) eggs will be produced each wrap. Max 20-25 eggs, sometimes more.

In the past week, the male burdigala built and maintained TWO bubblenests after a water change - one underneath the driftwood, and another in the film canister. He frequented both sites about an even amount of time, and both were clearly cared for equally. They eventually spawned in the film canister, but I thought it was funny that the male seemed to be presenting the female with two different options :) Now that the eggs are in the film canister, he has let the nest underneath the driftwood deteriorate and stays with the eggs...although the female seems to check that nest out every once and while...
Artificial hatching yields higher survival rates!
I was annoyed that I was having such small spawns. After watching them spawn several times, I was sure that it was the male's faulty rearing that was causing the trouble. I don't know if all males are as terrible a parent as mine is, but my male tends to build a terrible bubblenest that can in no way keep 40-50 eggs in there. What ends up happening is that his constant shuffling causes his eggs to fall out of the film canister, where they are summarily eaten by snails. Although the pair spawn frequently, I have only been able to raise 3-4 fry from each spawn to adulthood. This needed to change!

Although I completely love these fish, and unfortunately not a lot of people maintain this species, I am going to drop this project in favor of focusing on the rubra. I do not have enough space to grow out both species, since I believe combining them in a growout would be a disaster because the burdigala are so aggressive. Maybe one day I will return to this species, but for now, I will focus on a few species to optimize their care. I believe many hobbyists stretch themselves too thin with too many projects, and end up accidentally neglecting their fish. I know that I have done that in the past!