Very cool color chart made by AusAqua! A little difficult to read, but you can blow it up using the magnification tool in your internet browser (you can probably find it in the top bar under View).

The original posting can be found on the AusAqua forum: http://www.ausaqua.net/index.php?/topic/11528-map-to-the-colors/#comment-123089 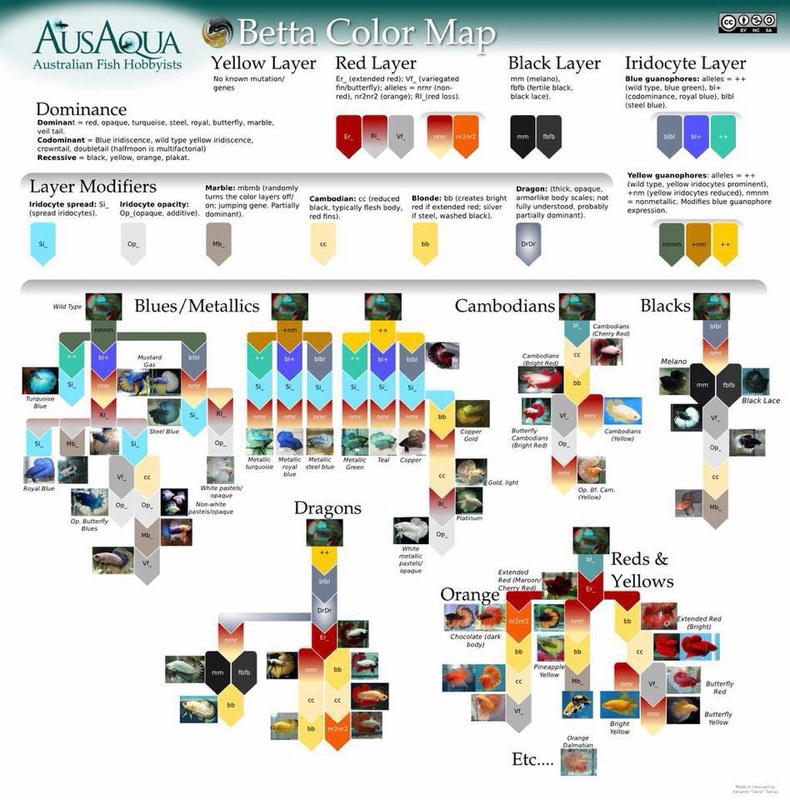 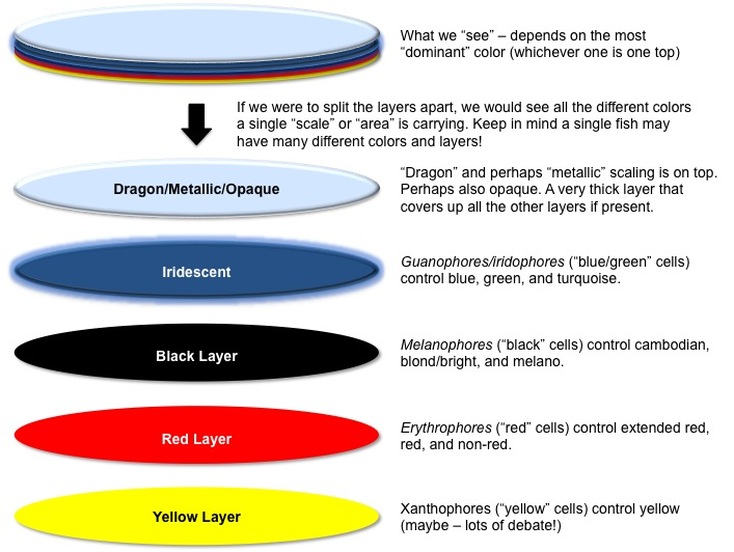 Seems like there has been a lot of confusion about color, and hopefully this VERY simplified schematic will help some. Keep in mind that betta colors are very difficult to understand and predict, which is what makes them fun, but hopefully thinking about them in the following manner will make things a little easier.

When you look at a fish, what your eye is actually perceiving are the colors that are on "top". Think of each scale as being a cake with many layers, and when you look at it from the top, you can only see the top one. Each of these "layers" controls a "color" (being VERY simple here!) Since each layer can be controlled by many different genes, you can see how what color we actually see can become very complicated very fast. For example, to see the yellow layer, we would have to have a fish that was lacking ALL of the other color layers just to be able to see the yellow!

It gets even more interesting when you realize that the different layers actually interact a lot. For example, a betta may visually appear light purple when it has a copper metallic layer covering a royal blue iridescent layer. It's easy to see why getting a beautifully solid true visual black betta is so difficult when you realize that you have to get rid of ALL of the iridescent layer to see it! I don't know what makes orange, but I would hazard a guess that it is an interaction between the red and yellow layers combined with the absence of all other layers.

The next cartoon I will do will show how some of these colors are actually controlled within the cell (yay electron microscopy!). Hopefully these "layers" of color are helpful in determining what is visually dominant or recessive to what.

This was adapted from "Basic Colour Genetics of Betta" by Chris Yew. It can be found on the BettySplendens site at (http://bettysplendens.com/articles/page.imp?articleid=895) 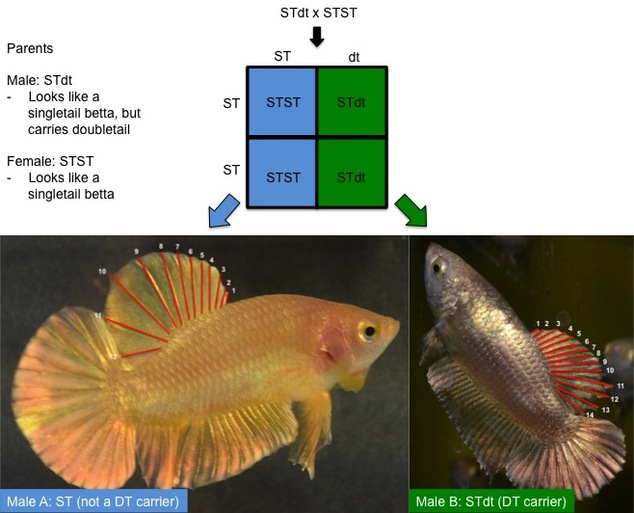 Working with the doubletail gene can be really fun! Fish that carry the dt gene have broader dorsals, which can be useful to to fill in gaps between the dorsal and the caudal fin, giving a more pleasing profile.

Singletail (ST) is dominant to doubletail (dt), which means that is a betta has even one version (or allele) of ST, then the betta will have one caudal. However, if it is carrying st (STdt), the dorsal will be wider than normal. Of course, is a betta is carrying both alleles of dt (dtdt), then they will be a double tailed betta.

Check out the Punnett square chart to the left. If you breed a male that is genetically STdt, which means that he is a singletail betta carrying the dt gene, he will likely have a broader dorsal than normal. If you breed that male with a female that has only STST, then about half the offspring will be carrying the dt gene, and the other half will not and appear as a normal singletail betta without the broader dorsal.

Remember that although Punnett squares are very useful, they are only estimates. Many spawns will probably be skewed one way or the other!

You can find the full-length article here: https://www.researchgate.net/publication/258525240_Early_development_of_Betta_splendens_under_stereomicroscopy_and_scanning_electron_microscopy