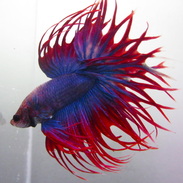 Unfortunate failed mate
This spawn occurred because my first attempt using the BOS female's father (a back-cross) failed miserably. The male is obviously a bit over the hill - no idea how old he is at this point - and they could never figure out an appropriate wrap. It was almost as if one betta was right-handed and the other left-handed! The female became so laden with eggs that I put in my "spawn master" CTDT male to rescue her. They ended up having an uncomplicated spawn and the male raised the fry without fuss. It looks like there are a good amount of fry in there and I am hoping that the previous spawn's failure to grow was due to my neglect rather than some genetic mishap.

The pair spawned while I was away and so I did not get any good spawning pictures.
Update: It appears that I have lost this spawn as well. No more crowntails! I am a little sad but am excited to work with the fish I brought back from Germany. Time to change things up and move things on!