Spawn 112512 - Thanksgiving
Spawn 072013
With this cross, I am experimenting with the intensity of the light bodied yellow when crossed with a pineapple yellow. I expect there to be about half darkbodied and half lightbodied yellows in the offspring. I also expect about half traditional and half show HMPK, since the female has increased branching in her caudal.

I managed to get some really beautiful spawning photos of this pair. Yay for learning how to use a DSLR!

Interesting observations with this spawn:
1) Looks like a ratio of about 75% clean yellows and 25% pineapples (expected 50/50).
2) Growing a little slower than "normal" for me.
3) The pineapples seem to have trouble growing the full length of their swim bladders in  comparison to their clean yellow brothers and sisters. Lots and lots of pineapple "bobbers" at this point. I hope that they grow out of it, otherwise I will have to cull them :/ 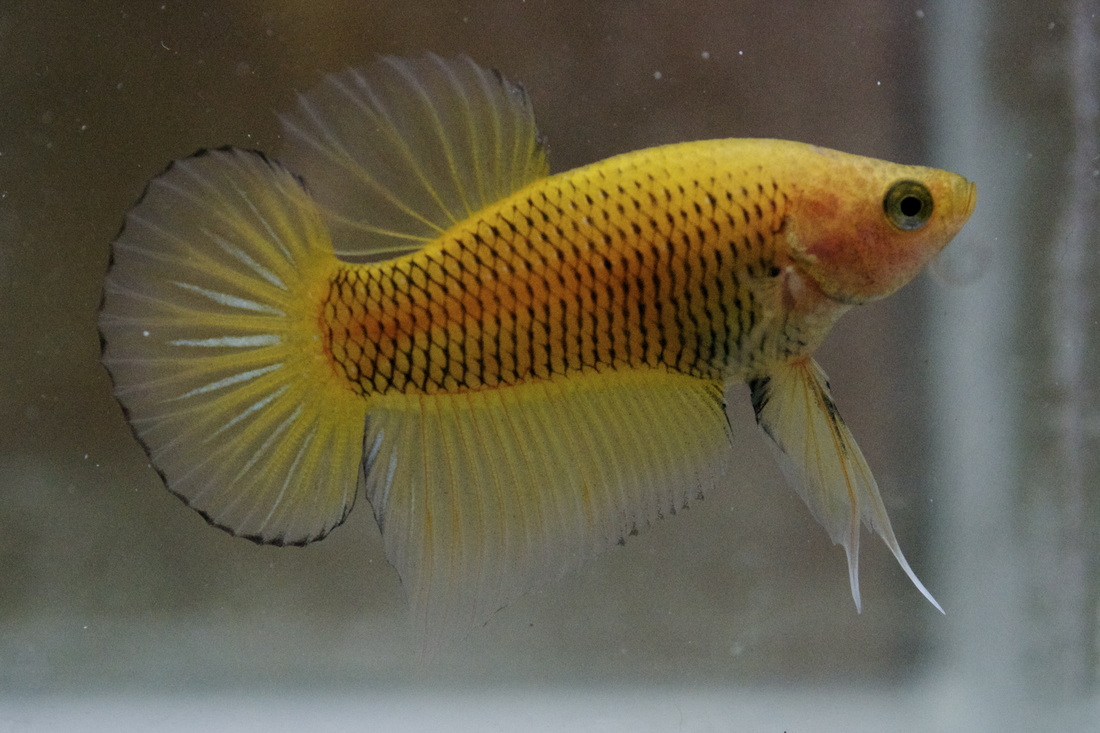 This...was the WEIRDEST spawn I've ever had! I don't think I will ever do another yellow x yellow spawn again. Color took a huge step backwards in this cross - strange little red spots in the fins, random black scaling, and iridescence. Also short bodies, a couple funky top lines, and even a 3 ventral fellow (see previous post). Wow lol
Although the male above has a nice body (and really ok form overall), his color faults are numerous. Pale yellow coloration, random black scales, iridescence in the caudal, and tons of little red dots on the fins.
This guy has the best show PK finnage in the spawn, tempered by the funky topline. Nice D-shaped caudal, balanced anal and ventrals that come to nice tips, and a nice show PK dorsal (notice how it is full and thrusted forward). No gaps between the unpaired fins. The black scaling could be more even over the top of the fish, and the yellow should reach the ends of his fins rather than fade as they do here.
Now the ultimate in weird...3 full, functional ventrals!! I think I'm going to have to keep him just because he makes me smile every time I look at him. What an attitude!

At this point, I think I will shelve this spawn. It was a little disappointing, because the mother of this spawn was a truly intense clean yellow (see spawn log)...but the results were far from what I expected. I do believe now that a yellow x yellow spawn dilutes out the intensity of the colors, and allows some weird recessive traits (the red dots in the fins?) to surface.