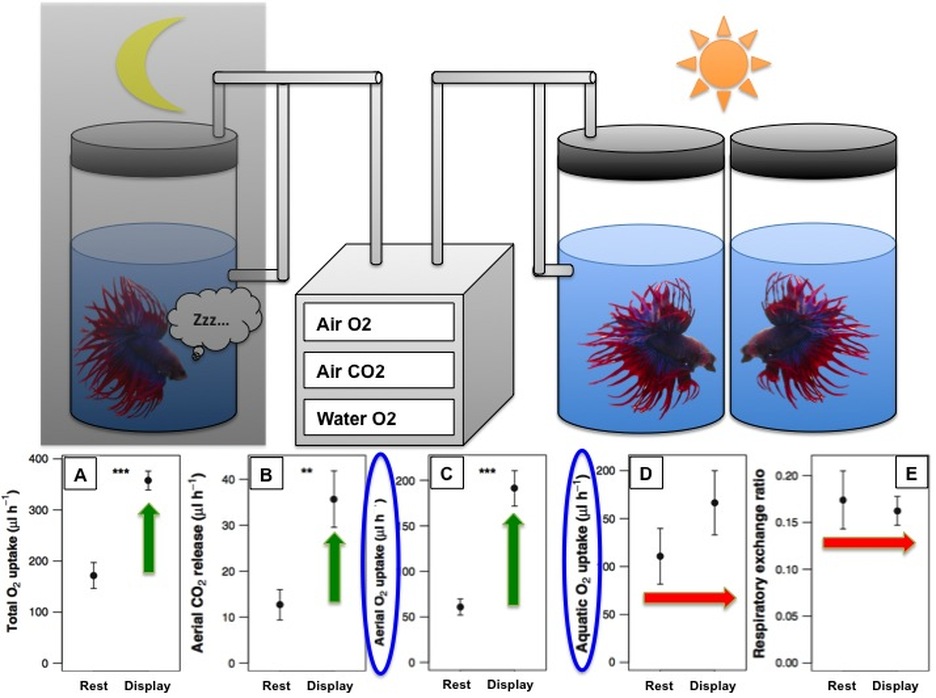 L. Alton, S. Portugal, and C. White from the University of Queensland and the University of London recently teamed together in an effort to determine how bettas manage oxygen consumption during fights. Bettas and other labyrinth fish can use both aquatic and atmospheric oxygen (O2) to satisfy their O2 requirements, a strategy thought to have evolved out of necessity in the very low O2 environments in which they evolved. However, during aggressive displays, bettas "flare" by opening their gill plates, which is thought to impede aquatic O2 use. Fish engaged in open warfare also have vastly increased O2requirements due to a surge in metabolic rate, and it was unclear as to whether bettas increased their aquatic or atmospheric O2 uptake. The investigators initially thought that bettas would increase their aquatic O2 uptake rather than their atmospheric O2 uptake, because going up for air during a battle would expose the breathing betta to an attack.

A: Total O2 uptake was increased in actively displaying bettas, which makes sense because they were under greater metabolic stress during active flaring.

B: Aerial (or atmospheric) CO2 released from bettas taking breaths also increased, due to their increased metabolic rate.

C: Aerial (or atmospheric) O2 uptake was increased by nearly 4 times in the actively displaying bettas, meaning the bettas were taking in lots of O2 with each breath.

D: Surprisingly, the aquatic O2 uptake was not significant (see the how the error bars overlap), suggesting that the bettas relied on atmospheric O2 rather than aquatic O2 to satisfy their increased energy needs. This goes against their previous hypothesis.

E: The respiratory exchange rate was also unchanged, which means that the bettas were unable to increase the amount of O2-CO2 exchange they could do in a single breath. (For example - when we exercise, we not only take more breaths per minute, but we also take deeper breaths. It appears that bettas cannot take "deeper" breaths, and can only rely on more frequent breaths to satisfy increased energy requirements).

The authors conclude that bettas are unable to increase aquatic O2 usage when fighting (possibly due to a limited gill surface area) and must instead rely on potentially life-threatening dashes to the surface for frequent bursts of atmospheric oxygen. However, they cite that earlier studies have shown that bettas and other labyrinth fish synchronize their breaths, so that neither opponent is disadvantaged while fighting (Simpson, 1968., among others).