Bubblenests do not inhibit microbial growth 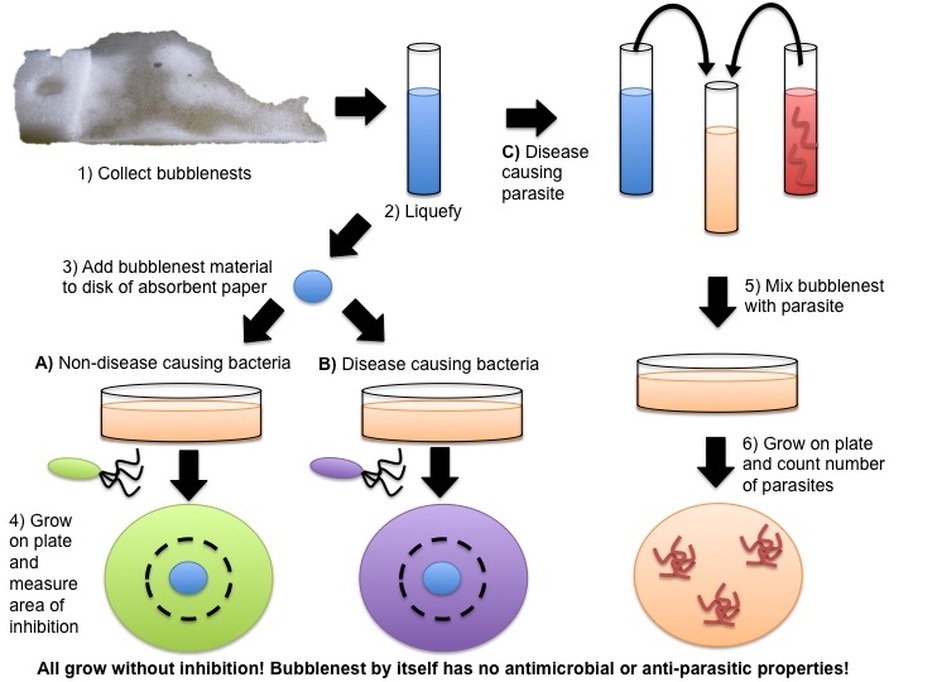 A group at University of Massachusetts decided to look at if a betta's bubblenest would have antimicrobial or anti-parasitic properties. They reasoned that a bubblenest might have antimicrobial or anti-parasitic molecules to help protect the developing eggs - in fact, there were several unidentified glycoproteins found in bubblenests that could perhaps serve as protective antimicrobial peptides. The authors first collected male betta bubblenests and then spun them at high speed so that they were a thick liquid (no more bubbles). They then tested whether the bubblenest liquid would be able to kill or slow the growth three different organisms: A) a non-disease causing bacteria (Escherichia coli) B) a disease-causing bacteria of fish eggs (Edwardsiella tarda) and C) a known disease-causing parasite of betta eggs (an oomycete: Saprolegnia parasitica). To test for the bacteria (A and B), they first dunked an absorbent disk of paper in the bubblenest liquid, so that it was soaked with whatever antimicrobial compounds it might have, and then placed this disk on a plate that had a lawn of bacteria seeded on it. If the disk with bubblenest liquid could prevent or slow the growth of the bacteria, then there would be an "area of inhibition" (the hypothetical dotted line around the disk) where the bacteria failed to grow. However, both the non-disease causing and diseases causing bacteria grew just fine even in the presence of the bubblenest compounds! The authors also tested a known egg parasite (C), and they did this by mixing the bubblenest liquid with a culture of the parasites for 6 hrs. Supposedly, the bubblenest liquid would be able to kill the parasites during this time. They then plated the mixture and counted the number of parasites that were able to grow (the dense clusters - these would be the ones that survived being treated with bubblenest compounds). However, the number of parasites were the same as those incubated for 6 hrs with pure water! The authors went on to show that betta eggs with bubblenest actually became infected at a higher rate than those grown without bubblenest material, suggesting that bubblenests actually are better microenvironments for bad (and good) microbes. The authors highlight the importance of male (or female!) betta parental care in successful spawn development, and argue that perhaps bubblenests may instead function to provide an oxygen-rich space for eggs to grow in their normally low-oxygen native environments. However, more experimentation is needed!